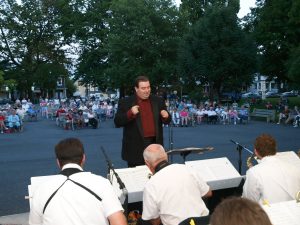 Vincent Pettinelli owns one of the most successful and in demand event entertainment companies in New Jersey and Pennsylvania. A multi faceted business owner with a flair for extravagance, Vince Pettinelli has taken a lifelong love of music and entertainment and turned it into gold. A highly trained musician attracting consummate professionals, Vince has created an entertainment company that is able to bring a high note to any event.

VPO Entertainment provides musical services including Disc Jockey, wedding ceremony music and music for small parties and cocktail events. The centerpiece of VPO Entertainment, the Vince Pettinelli Orchestra is a high energy 18 piece band that plays classic and modern big band favorites with a mix of R&B and pop for audiences throughout NJ and PA. With a great horn section, tight rhythms, and top quality vocalists, the Vince Pettinelli Orchestra and its music offers some of the most energetic and authentic examples of classical, big band, and jazz as well and genre influenced takes on contemporary popular hits.

Generations is an 8 piece event entertainment band that offers the same electrifying performances as the Vince Pettinelli Orchestra but on a smaller scale. It is the standard house band of VPO Entertainment. The musicians of Generations maintain the integrity of the full complement of the band, but have adjusted their performances to cater to weddings, corporate or social events, and fundraisers. Vince Pettinelli has gathered a group of musicians together that are some of the leading artists throughout New Jersey and Pennsylvania.

In addition to VPO Entertainment, Vincent Pettinelli has facilitated some of the most popular music and arts festivals in the New Jersey and Pennsylvania area. For over a decade, Vince was the Planner and Entertainment Director of the Phillipsburg Ole Towne Festival Board Member in Phillipsburg, NJ. Vince was also the former Director of Planning and Development for Musique & Art Nouveaux, an ongoing music and art festival. As a highly accomplished professional musician, Vince was able to attract Grammy award winning artists Peter Nero and Phil Woods to headline the Ken Brader Benefit Concert. The Ken Brader Benefit Concert was held in honor of his long time mentor and friend Ken Brader. During the holiday season, Vince Pettinelli is the business agent for the Holiday Brass, a 50 piece brass ensemble, and the Holiday Brass Quartet which performs in the Lehigh Valley area of New Jersey and Pennsylvania.
Highly sought after for his knowledge and dedication to musical and artistic integrity, Vincent Pettinelli has worked with or for some of the leading artists and organizations throughout New Jersey and Pennsylvania. Vince is always looking for new projects to either collaborate on or create. An intrepid businessman, Vince performs freelance work with various entertainment companies including All About Fun and Full House Entertainment. Vince also assists with providing support for fundraisers and private engagements. Vince maintains his ties to various renowned artists and organizations with the intention to make high-class music entertainment accessible to everyone, no matter the size of the event or budget. Vince Pettinelli is an unreserved professional whose expertise of event entertainment is second to none.

Take a horn section that pops, add dynamic rhythms and then top it off with smooth vocals and you have the perfect mix for any event. We have been entertaining audiences throughout the region with bands ranging from 8 to 18 pc. We provide a selection of music that will speak to all generations.

LET US BRING YOUR EVENTS TO LIFE

Comprised of the finest musicians in the area, we perform a variety of musical styles from big band to classic pop hits. We are available for private and public social functions for all ages. We are also a crowd favorite at outdoor venues, with a diverse song list that reaches audiences of all ages! We can tailor our performance to meet the needs of your event.

Want to keep up with what's going on at VPO Entertainment? Follow us across our Social Networks.